Fear and Loafing in South Dakota

One day this summer I woke up and realized I was in South Dakota. Then I remembered the really scary part. I was there on purpose.

I was on vacation. And I wasn’t alone. The world’s largest concentration of Winnebago campers was there with me.

Now, South Dakota may not be on your list of Top Ten Dream Vacation Spots. Maybe not even the top 100. But a lot of people do see South Dakota, and the tourism industry there is thriving. Why?

Well, first of all, an interstate highway goes right through the state, which is convenient. If you’re driving somewhere like California or Yellowstone National Park, you just might have to drive through South Dakota to get there. Second, there’s Mt. Rushmore.

Let me tell you about Mount Rushmore. It is everything you expect and more. Or less. Mount Rushmore is to South Dakota what the Statue of Liberty is to New York, what the Eiffel Tower is to Paris, what the Taj Mahal is to India. It’s on all their postcards.

Those four famous guys’ faces are an impressive sight carved up there in that big rock, and there’s some kind of historical lesson to be learned there too. Actual viewing of the monument takes about 13 seconds. 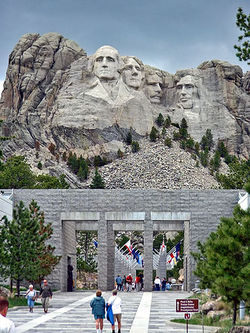 Predictably, the iconic hunk of rock is surrounded by a bucketload of brightly-colored baubles, burger pushers, book hawkers, Winnebago parking lots and a gift shop where you can buy all sorts of useful items like posters of Lincoln’s head and T-shirts designed by first grade art students.

That’s the thing with South Dakota. They aren’t content to let the area’s natural wonders speak for themselves. Rapid City, the state’s second largest town, is nestled in the beauty of the Black Hills, once called “a vest pocket version of the Rocky Mountains.”

Entrepreneurs have turned the place into a minor-league Wisconsin Dells, with “attractions” like Dinosaur Park, where you can see “seven life size prehistoric reptiles.” Or the “original” Flintstones Bedrock City, where you can buy (original?) Dino Dogs and Bronto Burgers. At Reptile Gardens, watch “incredible trained animals” operate the Bewitched Village.

Over in downtown Deadwood, the Adams Memorial Museum is “home of the Thoen Stone and Potato Creek Johnny’s Gold Nugget,” whatever they are. Near Mount Rushmore is the Cosmos Mystery Area, where you too can stand at a 60-degree angle to the earth.

And don’t forget Mitchell, South Dakota, where you’ll find the “World’s Only Corn Palace,” a big building built of actual corn, grasses and grain. “A truly unique attraction,” boasts the Mitchell Department of Tourism. Who am I to argue?

Altogether there are “about 85 bona fide attractions” just in the Black Hills area, according to a state tourist guide. But the granddaddy of ’em all has to be in Wall. That’s a city, son. All the towns out here have names like that: Ludlow, Custer, Redig, Nemo, Spearfish, Hill City, Lead. And Wall.

Wall is the home of Wall Drug, “the world’s largest drug store.” Signs along every highway within a half zillion miles scream, beckon and plead for you to visit Wall Drug.

“SEE THE SIX-FOOT RABBIT!” says one. “FREE ICE WATER!” blares another. “WORSHIP AT THE TRAVELING CHAPEL!” And so on.

What can I say? I couldn’t resist. I had to stop at Wall Drug. It was everything I expected and more. Or less.
There was Indian pottery and jewelry and souvenirs and buffalo burgers and western clothing and souvenirs and life-size carvings of Butch Cassidy and the Sundance Kid. There were western boots and mounted jackalopes and souvenir T-shirts that say “My parents went to Wall Drug and all I got was this stupid T-shirt.”

Consider yourself lucky, kid. You also missed out on the display of “100 old photos,” the Silver Dollar Bar, the one-ton petrified log, more souvenirs, and just in case you weren’t content with gazing at the real thing, a pint-sized replica of – you guessed it – Mount Rushmore. Oh yeah, somewhere in there is even an actual pharmacy.

Yes, after Wall Drug, you’ve seen it all. Every cockamamie marketing scheme anyone anywhere has ever devised to lure millions of innocent tourists to the biggest bunch of nothing in the middle of the biggest God-forsaken patch of sagebrush you have ever seen. Wall Drug is the tourist trap to end all tourist traps.

Just as I was about to give up hope, I found something that really was worth writing home about. A place that looks like the Sahara Desert. The moon. Definitely something off-planet. A place called the Badlands. 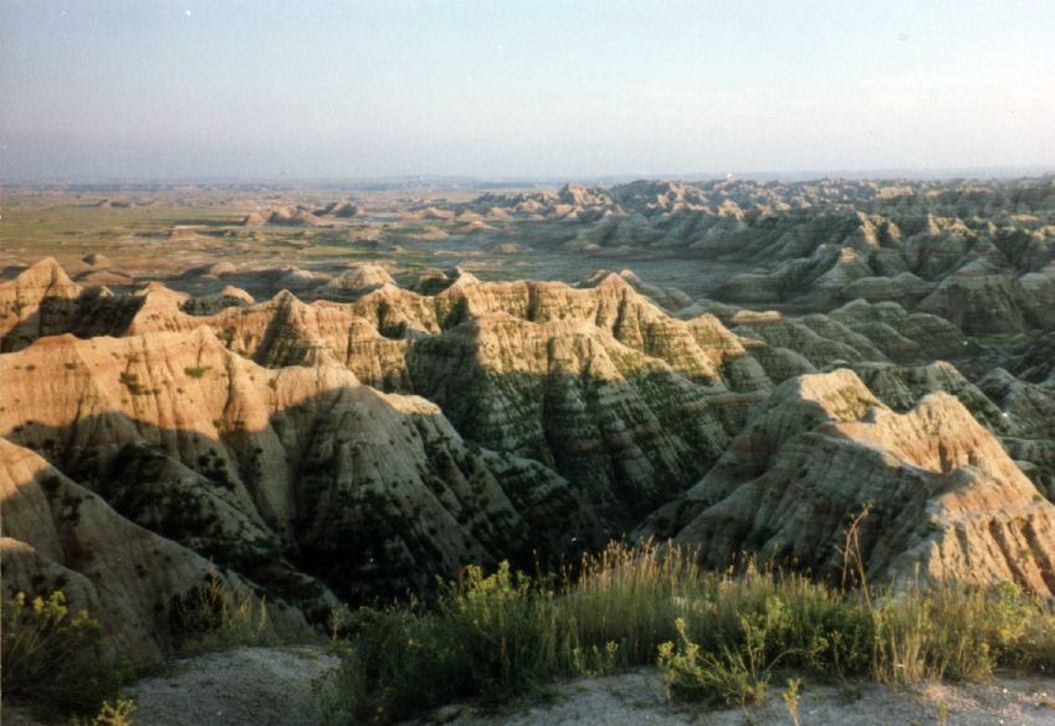 Over 30 million years ago, the area now set aside as the Badlands National Park was part of a great inland salt water sea. Centuries of wind and water erosion created miles and miles of painted desert, with craggy buttes 200 feet high and expanses of rolling sand valleys 100 feet deep. Instead of RVs, its inhabitants are bison and rattlesnakes and sagebrush and cacti. The Badlands have hardly been touched by the hand of man. Certainly not by the guy who does Wall Drug’s advertising.

The Badlands National Park – all 244,300 acres of it – represents everything that’s good about South Dakota. Like the Black Hills National Forest and Custer State Park and the Missouri River reservoirs, this is the South Dakota that doesn’t need flashy billboards in 16 colors or 80-foot-high jackalopes or jack-o-lanterns or jackasses or whatever jacks you can dream up to get people to stop. This is the part of South Dakota that just is. And what it is, is incredible. Really.

No, I don’t care where the hell Wall Drug is. But the Badlands – now, that’s something else. I’ll gladly take my vacation in that part of South Dakota anytime. 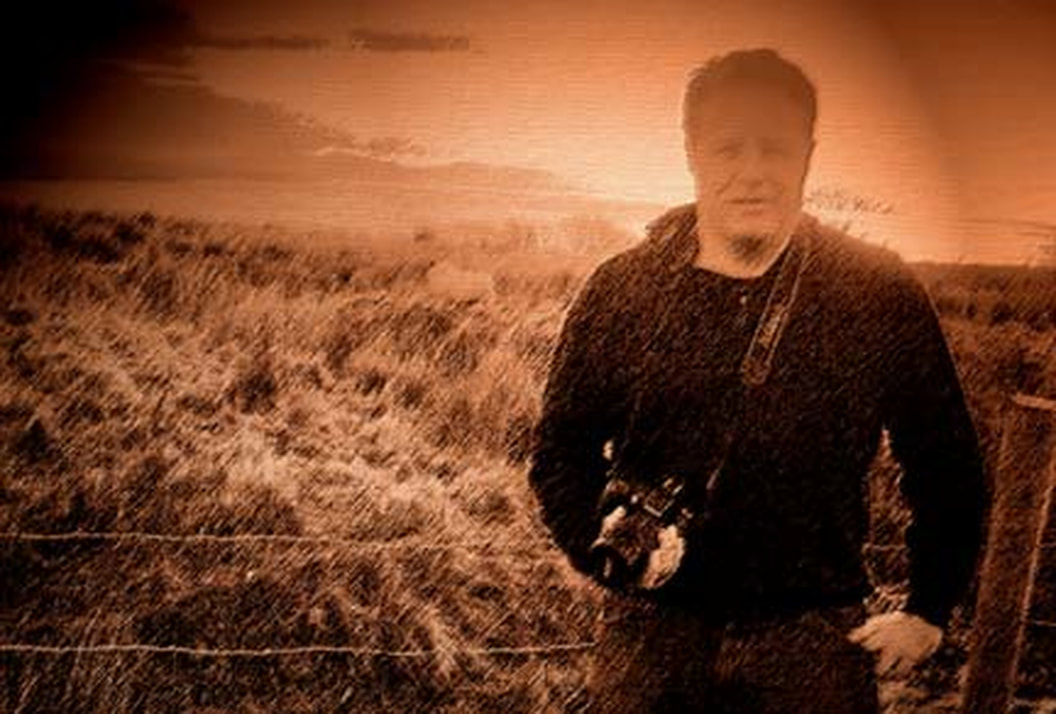 Mike Starling's original music is heard on numerous recordings and soundtracks, and his stories and photos have been featured in books, films, exhibits, album covers, mags and other media. ​
FULL BIO
starlingarchive.weebly.com is the authorized website for samples of published work by the Wisconsin-based writer, artist and musician Mike Starling. ​Photo of Starling on assignment in Ireland by J. Winke. Wall Drug dinosaur photo by Minnesota Jones. Wall Drug Free Ice Water sign photo by JKeiser. Mount Rushmore park photo by Kelly Martin. Mount Rushmore heads photo is in the public domain. Badlands National Park photo by Ixatixel. All are posted via a creative commons license from the Wikimedia Commons free media file repository. Website developed and managed by Nine Volt Media. ©MMXX-MMXXI. All rights reserved.